It just goes to show: that thing I worried about yesterday ended up being a complete non-issue. And the thing I didn’t worry about is the problem.

That green marker I posted about yesterday came off just fine, and I’d added enough glass on its bottom so that there was no roughness or anything at all to even notice. It came out beautifully! Well done me!   =) 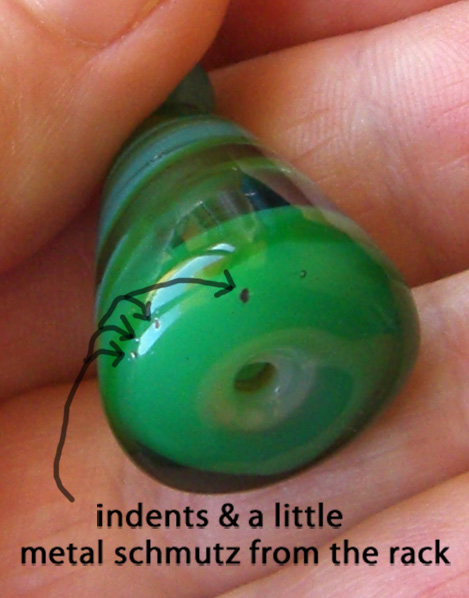 But the other green marker, which I made while apparently still thinking about the first, got put in the kiln while it was too hot.

To give an idea of the temperatures we’re talking about here, while the glass is in the flame of the torch, it’s between 1200-1700 degrees F (depending on what I’m doing with it). It stiffens as it cools and stops moving at about 1050 degrees F…so from the looks of these marks it must have around 1200 degrees when I popped it in the kiln. And then I must have bumped it as I was closing the kiln door because it has marks on its bottom from where it came to rest against the steel rack in the kiln.

So! Yep, we ended up with a green marker for our own collection (actually I’ll experiment with it next time I go to England…gonna melt it flat in my fusing kiln and see what comes of it…it may melt down into a cool spiral design…could make a groovy pendant out of it!)

So is that a symmetry thing? I put worry energy out there about a green marker, and indeed I end up with one faulty one?

This is a cool little interactive map showing the middle point of zipcodes from my Etsy sales. It's like when you blow on a dandelion seed head and get to see where the seeds have landed! Weeeeeee! Fun!